The Life of the Báb

On a spring evening in 1844, a conversation took place between two young men that heralded a new era for the human race. A Persian merchant announced to a traveller in the city of Shiraz that He was the Bearer of a Divine Revelation destined to transform the spiritual life of humanity. The merchant’s name was Siyyid ‘Alí-Muhammad, and He is known to history as the Báb (meaning “the Gate” in Arabic).

The middle of the 19th century was one of the most turbulent periods in the world’s history. Great revolutions were under way. In parts of Europe and North America, time-worn social structures and relationships were being challenged by sudden and unprecedented changes in the fields of agriculture, industry, and economics. At the same time, throughout the world followers of divers religions perceived that humanity was on the cusp of a new stage in its development, and many prepared themselves for the imminent coming of a Promised One, praying fervently that they would recognise Him.

A young scholar named Mulla Husayn was one such soul engaged in a life-changing quest. He felt drawn, as if by a magnet, to Shiraz—a city renowned for the perfume of its roses and the singing of nightingales. On the evening of 22 May 1844, as he approached the gate of the city, he was greeted by a radiant young man who wore a green turban. This stranger greeted Mulla Husayn as if he were a lifelong friend.

“The Youth who met me outside the gate of Shiraz overwhelmed me with expressions of affection and loving-kindness,” recalled Mulla Husayn. “He extended to me a warm invitation to visit His home, and there refresh myself after the fatigues of my journey.” 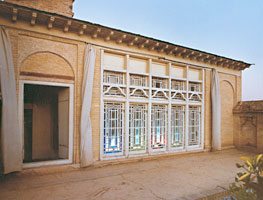 The house of the Báb in Shiraz, now destroyed, where He declared His mission on 23 May 1844.

The two men spent the entire night immersed in conversation. Mulla Husayn was astonished to discover that each of the characteristics he was seeking in the Promised One was manifest in this young man. Before departing early the next morning, his Host addressed to him these words: “O thou who art the first to believe in Me! Verily I say, I am the Báb, the Gate of God…Eighteen souls must, in the beginning, spontaneously and of their own accord, accept Me and recognize the truth of My Revelation.”

Within several weeks of the Báb’s declaration, seventeen more people had, by their own spontaneous efforts, recognized His station, had renounced the comforts and security of their old way of life, and—severed from all attachments—had set out on the mission of spreading His teachings. These first eighteen followers of the Báb became known collectively as the “Letters of the Living.”

One of them, the poetess Tahirih, was to play a pivotal role in breaking with the past, raising the call to full equality between women and men. The last member of the group, a young man who was given the title Quddus—meaning “The Most Holy”—displayed a level of devotion and courage that made him the most revered of the Letters of the Living.

Mulla Husayn was overwhelmed at the words that poured forth from the Báb that night. The Báb demonstrated an innate wisdom that, even when He was young, had left His family awe-struck. “He is not to be treated as a mere child,” His schoolmaster had told them, “He, verily, stands in no need of teachers such as I.”

The Mission of the Báb

Born in Shiraz, a city in southern Iran, on 20 October 1819, the Báb was the symbolic gate between past ages of prophecy and a new age of fulfilment for humanity. His primary purpose was to awaken the people to the fact that a new period in human history had begun, one which would witness the unification of the entire human race and the emergence of a world civilization of spiritual and material prosperity. This great day would be established through the influence of a divinely inspired Educator, whom the Báb referred to as “He Whom God shall make manifest.” It was His own mission, the Báb declared, to herald the coming of this promised Manifestation of God. The Báb explained that the new Manifestation would usher in an age of peace and justice that was the hope of every longing heart and the promise of every religion. The Báb instructed His followers to spread this message throughout the country and to prepare people for this long-awaited day.

The Báb’s message aroused hope and excitement among people from every walk of life. Although a number of prominent Muslim clerics accepted the Báb, many others felt insecure and threatened by His growing influence and feared their entrenched positions of privilege and authority would be threatened by the empowerment of the people. They denounced the Báb’s teachings as heretical and set out to destroy Him and His followers. Controversy raged in mosques and schools, in streets and bazaars throughout the land. 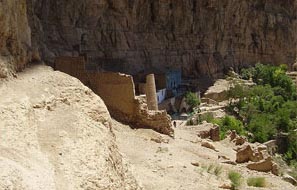 Remains of the mountain fortress of Mah-Ku where the Báb was imprisoned.

As a result, the Báb was banished—from city to city, from prison to prison. But none of the plans His enemies devised could prevent His influence from spreading. In every place He was sent, His grace and the magnetic attraction of His personality won the admiration of civic leaders and townspeople. Callous prison governors and soldiers guarding Him became His followers. Each time, believing they were extinguishing the flame of His influence, the authorities merely added fuel to His life-giving light. In time, the Báb’s popularity grew to such an extent that some prominent clergymen appealed to the government to have Him executed. The Bábís, shut off from their leader, boldly defended themselves against the full force of the state, which was summoned for their destruction. Thousands of His followers—men, women and children—suffered cruel and brutal deaths.

The Execution of the Báb

In 1850, Mirza Taqi Khan (Grand Vizier of Nasiri’d-Din Shah) ordered the Báb’s execution. When the guards came to take Him on the day of His execution, 9 July, the Báb told them that no "earthly power" could silence Him until He had finished all that He had to say. Thousands crowded the rooftops that overlooked the barracks square in Tabríz where the Báb was to be executed by a firing squad. In the intense heat of the noonday sun, He was suspended by ropes against a wall of the barracks, along with a young follower. A regiment of 750 soldiers opened fire in three successive volleys. When the smoke and dust of the gunpowder cleared, the Báb had vanished from sight. Only His companion remained, alive and unscathed, standing beside the wall on which they had been suspended. The ropes by which they had been hung alone were severed. After a search, the Báb was found back in His cell, continuing the conversation with His secretary that had been earlier interrupted.

“Now you may proceed to fulfil your intention,” the Báb told His captors. Again, He was brought out for execution. After the first regiment refused to fire, another was assembled and ordered to shoot. This time the bodies of the Báb and His young follower were shattered. A whirlwind of dust engulfed the city, blotting out the light of the sun until nightfall.

In 1909, after being hidden away for more than half a century, the Báb’s remains were finally interred on Mount Carmel in the Holy Land. Today, entombed in an exquisite golden-domed Shrine, encompassed by spectacular terraced gardens and fountains, the Báb rests in conspicuous glory, a symbol of the triumph of the Cause that He heralded over the fiercest of opposition. Throughout the world, millions recognize the Báb as the divinely inspired Herald of the Bahá’í Faith and turn reverently to His Writings to discover the “resplendent Light of God.”