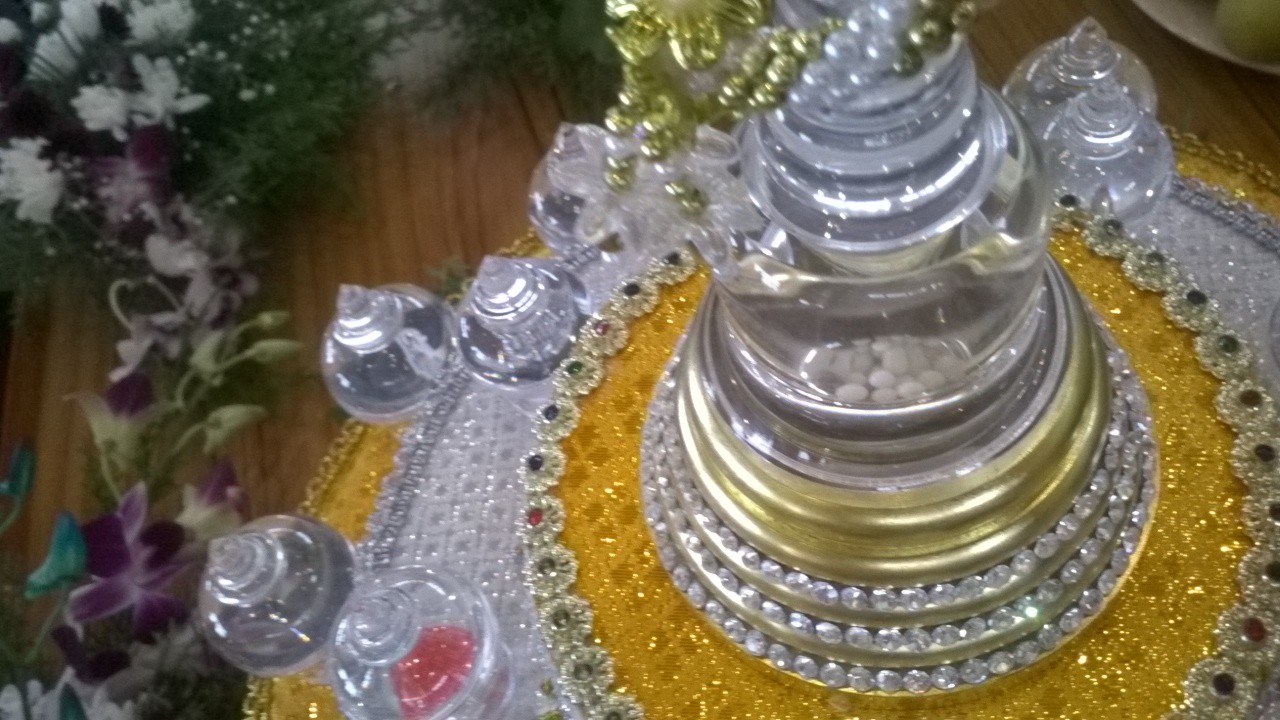 Buddha relics. From Ai Kien Dang
In a great show of generosity, appreciation, and respect, the Thai Theravada Buddhist temple delegation offered these precious relics to the Vietnamese Mahayana temple near Melbourne. The donation of such auspicious objects for the benefit of all living beings is a significant contribution to breaking down the barriers of tradition.
The relics, which are encased in a beautiful, three-tiered clear crystal container, include bone relics of the Buddha, as well as bone relics of some of the Buddha’s chief disciples, including Mahakashyapa and Maudgalyayana. They were formally offered by Venerable Phra-kru Phavananurwat, abbot of Wat Monglkodhammakayaram, to QMT abbot Venerable Thich Phuoc Tan OAM as part of an elaborate ceremony. Also taking part in the proceedings was Venerable Thich Tu’ong Nhan, the vice abbot of Phap Luan Templein Hue, Central Vietnam, who is currently visiting Australia.
“We had over 300 hundred people in attendance from the Thai and Vietnamese Australian communities, including some very special guests for the ceremony, which included the formal offering of the relics, chanting in Pali and Vietnamese, and a Dharma talk given by the visiting Thai Venerable. Lunch was then offered to the monastic sangha,” said QMT spokesperson Ai Kien Dang. She added, “Everyone was waiting with enthusiasm from early morning. We were all so very happy to come and have a look at the relics, and to participate in the ceremony. We at QMT feel very honored to receive this wonderful gift from our Thai Dharma brothers and sisters.”
MC for the event Michael Hoang said, “A joyous time was had by all; everyone was very happy to witness these precious relics and experience the immense generosity of our Thai Buddhist friends in making the offering. I think this is a great example of the respect and connection between the Mahayana and Theravada traditions here in Australia.”

From Ai Kien Dang
Following the formalities, participants enjoyed a delicious Vietnamese vegetarian lunch prepared by the laity. Everyone then had the opportunity to view the relics up close, as they were kept on public display for the rest of the day. The event also marked the beginning of QMT’s annual one-week meditation retreat, which concluded on Sunday 11 January.
QMT is a center for the Vietnamese Buddhist community and headquarters of the United Vietnamese Buddhist Congregation of Victoria. It is situated about 30 minutes’ drive west of Melbourne, overlooking the gentle Maribyrnong River. The temple’s history can be traced back to 1980 with the arrival of Venerable Thich Phuoc Hue, who was the first Vietnamese monk in Australia. The temple moved to its current location in 1989. Its new main shrine, buildings, and community center were completed in early 2011, and opened and blessed by His Holiness the Dalai Lama in July of the same year.
Venerable Phuoc Tan, the current abbot of QMT—who is also abbot of Sydney’s Phuoc Hue Temple (PHT)—took up the role in 1997. He took novice vows with the late Venerable Phuoc Hue at PHT in 1981 and was fully ordained in 1990 in Lyon, France. He was awarded an Order of Australia Medal (OAM) in 2008, in recognition of his services to the community, and is currently vice president of the Australian Sangha Association, as well as vice president of the World Fellowship of Buddhists and president of the United Vietnamese Buddhist Congregation in Australia.
Wat Monglkodhammakayaram is located in Chiang Rai, in northern Thailand, and is a branch of Bangkok’s ancient royal temple, Wat Paknam. While in Australia, Venerable Phra-kru Phavananurwat will visit the Great Stupa of Universal Compassion in Bendigo, in central Victoria, and will attend a meditation retreat in Sydney.
Andrew J. Williams, Buddhistdoor International
Source: phathoc.net (Jan. 29, 2015)