I. A Burning Question

I. A Burning Question

The 20th century, which started with a strong impulse of faith in human progress, rather difficult to imagine nowadays, came to a conclusion as one of the darkest and bloodiest centuries in the history of humankind. No other century has known as many violent deaths. But, at least, there is one glimmer of light in this dark period: the birth of the ecumenical movement and ecumenical dialogues. After centuries of growing fragmentation of the una sancta ecclesia, the one, holy Church that we profess in our common apostolic creed, into many divided churches, a new movement developed in the opposite direction.

In deep sorrow and repentance, all churches realised that their situation of division, contrary to the will of Christ, was sinful and shameful. It is significant that this new ecumenical awareness developed in the context of the missionary movement. The division of the Church was recognised as a major obstacle to world mission. The division darkens the Church’s mission as a sign and instrument of unity and peace for the world. This is why, in the 20th century, all churches engaged in ecumenical dialogues set out to re-establish the visible unity of all Christians. The foundation of the World Council of Churches in Amsterdam in 1948 represented an important milestone on this ecumenical journey.

The Catholic Church abstained at the beginning. The encyclical letters Satis cognitum of Leo XIII (1896) and Mortalium animos of Pius XI (1928) even condemned the ecumenical dialogue which seemed to relativise the claim of the Catholic Church to be the true Church of Jesus Christ. Yet Pius XII already paved the way to a more open attitude, albeit with caution, in an Instruction of the Holy Office of 1949. However, only the initiative of Pope John XXIII (+1963) and the Second Vatican Council (1962-65) brought a shift. The conciliar Decree on Ecumenism Unitatis Redintegratio stated that the ecumenical movement was a sign of the work of the Holy Spirit in our time (Unitatis redintegratio, 1), opening the way for the ecumenical movement and highlighting the importance of dialogue with separated brothers and sisters and with separated churches and church communities (Unitatis redintegratio, 4; 9; 11; 14; 18; 19; 21-23).

Pope Paul VI made the idea of dialogue central in his inaugural encyclical Ecclesiam suam (1963). This line was taken up in a Document of the then Secretariat for Promoting Christian Unity entitled Reflections and Suggestions Concerning Ecumenical Dialogue (1970), later in the Ecumenical Directory (1993) and finally in the great, important and even prophetic ecumenical encyclical of John Paul II Ut unum sint (1995).

Nevertheless, the new beginning was not easy. From the onset, the first Secretary General of the World Council of Churches, Dr. Visser’t Hooft, raised the question as to whether the Catholic Church and the World Council of Churches understood ecumenism in the same way. This question was also related to the meaning of ecumenical dialogue, which the conciliar Decree on Ecumenism had proposed as way of contributing towards unity.

The question arose again even more sharply when last year the Congregation for the Doctrine of the Faith issued the Document Dominus Jesus affirming that the Church of Jesus Christ subsists fully only in the Roman Catholic Church and that the communities stemming from the Reformation of the 16th century are not Churches in the proper sense. This statement angered many protestant Christians and was perceived by them as bold and offensive.

Such questions do not arise only and not even primarily with regard to the Catholic position. At present we see in all religions, in all cultures and in all churches a new quest for identity. Who I am? Who we are? This type of question should be seen as a positive sign; for dialogue presupposes a partner with an individual identity and with distinct fundamental positions. But the identity question can easily turn into a fundamentalistic position which absolutises one’s own narrowly understood identity, and instead of dialogue uses means of violence in order to defend, to affirm or to expand this position and to fight against other positions and convictions. Such fundamentalism is perhaps the most dangerous threat for peace in our days.

Speaking on ecumenical dialogue and starting a dialogue on dialogue presupposes that we know first what dialogue is at all. Dialogue is one of the most fundamental concepts of 20th century philosophy and is related to today’s personalist way of thinking. It may be enough to mention the names of Martin Buber, Franz Rosenzweig, Ferdinand Ebner, Emmanuel Levinas and others. The young Polish professor Karol Wojtyla, with his philosophy of love and responsibility, was influenced too by this kind of personalistic thinking.

This new trend emerging in the 20th century characterised by dialogical philosophy marked the end of western monological thinking, and implied self-transcendence of the person towards the other. The starting-point and the fundamental principle of dialogical philosophy is: ‘I cannot be without thou’, ‘We do not exist for ourselves’, ‘We exist with and for each other’, ‘We do not have only encounter, we are encounter; we are dialogue’. The other is not the limit of myself; the other is a part and an enrichment of my own existence. So dialogue is an indispensable step along the path towards human self-realisation. The identity of the person can be only an open and dialogical identity.

Dialogue therefore is not only dialogue consisting of words and conversations; it is much more than small talk. Dialogue encompasses all dimensions of our being human; it implies a global, existential dimension and implies the human subject in his or her entirety. Of great importance is especially the field of symbolic interaction. Thus, dialogue is communication in a comprehensive sense; it withstands and criticises our western individualistic way of life, and means ultimately living together and living in solidarity for each other. Dialogue implies fairness and justice. 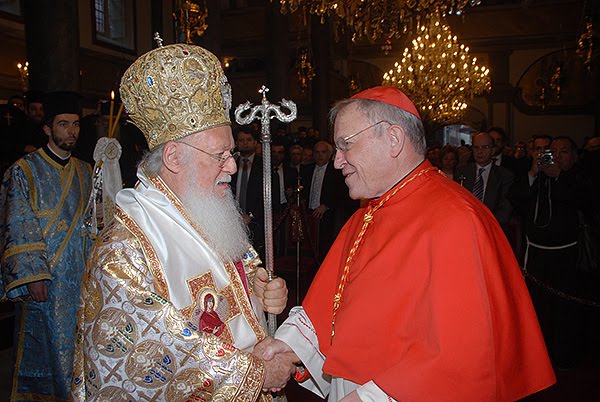 Such dialogue is not only essential and necessary for individuals. Dialogue concerns also nations, cultures, religions. Every nation, culture, religion has its riches and its gifts, but also its limits and its dangers. A nation, culture or religion becomes narrow and evolves into ideology when it closes itself and when it absolutises itself. Then the other nation, culture and religion becomes the enemy. The “clash of civilisations”, as Huntington calls it, will ensue. Dialogue is the only way to avoid such a disastrous clash. Thus, especially today dialogue among cultures, religions and churches is a presupposition for peace in the world. It is necessary to pass from antagonism and conflict to a situation where each party recognises and respects the other as a partner and does not try to impose its own interests and values.

It is superfluous to say that such an intercultural and interreligious dialogue in our present situation is necessary especially between Christianity and Islam, between the western and the Arabic world. Medieval culture, philosophy and theology exemplify how fruitful such a dialogue can be for both sides. The Summa theologiae of Thomas Aquinas would not have been possible without the influence of and critical dialogue with Arabic philosophers such as Maiomonides, Avicenna, Averroes and others.

In today’s world of globalisation there are two dangers to avoid. On the one hand, we must shun every kind of nationalism, racism, xenophobia, and oppression of people through other people, the claim of superiority and cultural hegemony. Nations, cultures and religions must open themselves and enter into dialogue. This presupposes mutual tolerance, mutual respect, mutual understanding and acknowledgement both of one’s own limits and of the riches of the other, and it presupposes willingness to learn from one another. On the other hand, this does not mean a uniform universal culture, where the identity of individual cultures is extinguished. We are becoming increasingly aware that our western civilisation cannot become the universal culture. Such a westernised uniformism is an authentic fear, especially among Arabic nations which are proud of their own cultural heritage but feel themselves culturally dominated and even humiliated.

The aim of dialogue is neither an antagonistic pluralism nor a boring uniformism but a rich dialogue-unity of cultures, where cultural identities are preserved and recognised, but also purified from inherent limits and enriched by intercultural exchange. Such dialogue-unity between cultures and religions developing beyond antagonism and uniformism is the only way to peace in the era of globalisation. Globalisation can be peaceful only when it ensues a globalisation of solidarity.

The ecumenical movement can be seen as one important element within such an ongoing world-wide process for peace and reconciliation. Dialogue between churches is a presupposition to ensure that the Church in a more efficient way may be a sign and instrument of unity and peace in our world.