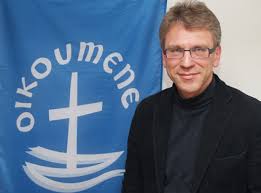 VATICAN CITY  (Dec. 11, 2012) - The secretary of the World Council of Churches (WCC), Olav Fykse Tveit, addressed a traditional Christmas message to the faithful of the 349 communities that form the ecumenical fellowship. The text opened with two Biblical citations, the first from the Prophet Isaiah: "a bruised reed he will not break, and a dimly burning wick he will not quench; he will faithfully bring forth justice", and the second from the Gospel of St. John: "What has come into being in him was life, and the life was the light of all people. The light shines in the darkness, and the darkness did not overcome it".

"What the Word has brought into being is life, and the life is the light of all people", writes Tveit. "In the coming year, the World Council of Churches will focus its witness and work around a simple prayer which serves as the theme of our tenth Assembly: 'God of life, lead us to justice and peace'".

This prayer will also be the theme of the 10th General Assembly of the WCC, which will take place in Busan, South Korea, from October 30th– November 8th, 2013. The program covers "five dimensions of being the church together in the world today – koinonia (one faith and fellowship in Christ), martyria (witness in the world), diakonia (serving justice and peace), ecumenical formation (for leadership) and inter-religious cooperation (a common context)".

"In the seasons of Advent, Christmas and Epiphany, we are particularly aware of God’s gift of light revealed in the eternal Word who became flesh, and who dwells among us even now," he stated.

"This is the light that gives us hope for this present world in spite of disunity, abuse, hatred, violence, poverty, greed and corruption. Christ’s light is the lamp for our feet that shows us the way toward justice and peace. Even when our own wicks burn dimly, the Word of God withstands the darkness, faithfully bringing forth justice on our common way toward peace," concluded the secretary of the World Council of Churches.