Apart from individual initiatives by saints and missionaries, the Councils themselves were often intended to heal the divisions in the Church, particularly the medieval General Councils of Lyons II (1274) and Basel/Ferrara/Florence/Rome (1439). In India itself there were ecumenical efforts among the St Thomas Christians already in the 18th century under the leadership of Mar Joseph Kariattil and Fr Thomas Paremakkal.

Contemporary ecumenism began outside the Roman Catholic Church. Though it is impossible to pinpoint the precise beginnings of this movement, a commonly accepted date is 1910, the year of the International Missionary Conference at Edinburgh. However, more than sixty years earlier Geogre Williams founded the first Young Men’s Christian Association (YMCA), London, 1844, “to seek to unite those young men who, regarding Jesus Christ as their God and Saviour according to the holy scriptures, desire to be his disciples in their faith and in their life, and to associate their efforts for the extension of his kingdom among young men” (Paris, 1855).

This was a foreunner and symbol of the emerging spirit of unity among Protestant Churches. Many such groups followed, and the corresponding Young Women’s Christian Association (YWCA) was started in London in 1855. In 1846 about 800 European and North American Protestants formed an “Evangelical Alliance” to coordinate Protestant enterprises in missions, publishing and social reform, and in 1875 a World Alliance of Reformed Churches (WARC) was formed with similar aims.

One of the most influential factors in the ecumenical movement was the mission movement that in the nineteenth and twentieth centuries had spread to all corners of the earth. Missionaries experienced their divisions as a great obstacle to their witness to the Gospel. This led to the 1910 Conference. Three important movements emerged out of this Conference at Edinburgh, namely, the International Missionary Council (1921), the Life & Work movement (1925) and the Faith & Order movement (1927). The experiences of the two latter movements finally led to the formation of the World Council of Churches (WCC) in 1948. Whereas the tasks of the Faith & Order movement were carried on by the Commission on Faith & Order within the WCC, the Life & Work movement became the very dynamics of the WCC. The International Missionary Council became part of the WCC in 1961 at its Third Assembly in New Delhi.

The World Council of Churches

The WCC is not a Church in its own right but noly a fellowship of Churches acting as a forum in which the Churches can discuss issues pertaining to the promotion of unity and mission. To date the WCC has held eight Assemblies, the last at Harare (Zimbabwe) in 1998. Because of different theological presuppositions and also because of sociological reasons the Roman Catholic Church is not a member of the WCC but participates in a number of its programmes.

The Faith and Order Commission

The Faith & Order Commission is the intrusment within the WCC that discusses doctrinal matters. It holds its own plenary sessions regularly, and World Conferences at differcent intervals. The last one was the Fifth World Confernce held at Santiago de Conpostela in 1993 after a lapse of thirty years. This lapse was very significant because after the World Conference in 1963 all doctrinal discussions pertaining to the unity of the Church had been progressively situated within the larger context of the ‘renewal of the human community’ which is intrinsically linked to the search of justice, peace and the integrity of creation.

The greatest achievement of the Faith & Order Commission is the convergence statement on “Baptism, Eucharist and Ministry’ (BEM 1982), at times called the Lima document, which has been fairly well received, though not owned, by many of the Churches of the world. The Roman Catholic Church has full participation in the Faith & Order programmes of the WCC and since 1968 appoints 12 members to the Commission. 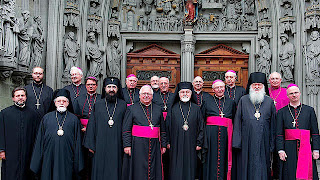 The Roman Catholics and Orthodox were "sister Churches" - Photo: nftu.net

Guidelines For Ecumenism : Towards an Ecumenical Life-Style

Office of Ecumenical and Interreligious Affairs