Buddhists and Christians have lived among each other from the early years of Christianity. Small communities of Christians existed in India, possibly as early as the first century C.E., and certainly by the 7th century, at which time there was also a Christian community in China, but records of dialogues between these communities have not come to light. At the beginning of the modern era, the European voyages of exploration and the subsequent expansion of commercial and colonial powers in Asia set the stage for the first major encounter between these religions. The explorers as well as the missionaries who

accompanied them saw themselves as part of a divine mission to spread the gospel; they brought the word of God into Asia, but they also instituted European structures of power and domination over the indigenous peoples, Buddhists, as well as Hindus and members of other religions. This was not an 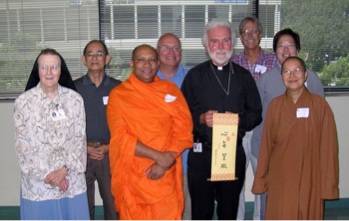 Today something new is occurring in the relations of these two religions. In this city named after the most sacred "Queen of Angels" of Christianity, large Buddhist and Christian communities live side by side. The great wave of Asian immigration into Los Angeles coincided with a new openness towards other religions in Catholicism, promulgated by the decree, "Nostra Aetate," (Declaration of Non-Christian Religions) of the Second Vatican council in 1965. It set the stage for a real dialogue.

In Los Angeles a unique situation for Buddhism developed. All the major Buddhist schools and ethnic traditions, each with its own language and customs, are found here. The great diversity within Buddhism stimulated inter-Buddhist dialogue. In 1980 the Buddhist Sangha Council of Southern California was formed, the first such Buddhist organization to embrace all forms of Buddhism. The Sangha council, while establishing its own dialogue among Buddhist groups, began to explore inter-faith dialogue.

During these years the Roman Catholic community followed through with the guidelines of Nostra Aetate. In 1969 the Catholic Archdiocese of Los Angeles with other religious communities founded the Interreligious Council of Southern California; in 1971 Buddhist communities joined. In 1974 the Archdiocese formed the Commission of Ecumenical and Interreligious Affairs to coordinate and expedite its relations with other religious communities. Through the Commission and the Council of Interreligious Affairs one on one exchanges began between Catholics and Buddhists. Some highlights of these exchanges included the fifteenth anniversary celebration of Nostra Aetate in 1980; the twentieth anniversary in 1985; the 1986 Los Angeles observance of the assisi World Peace Day; and the multireligious celebration of the 1987 visit of Pope John Paul II in Little Tokyo, "Nostra Aetate Alive." This history of cooperation

laid the foundation for the Los Angeles Buddhist-Catholic Dialogue, which began February 16, 1989.

The Buddhist Leaders of Los Angeles agreed to enter the dialogue in spite of some feelings of reticence. Fears and distrust of Christians formed during the colonial period still linger among much of the Buddhist population. Nevertheless, some of the Buddhist leaders had developed friendly relations with leaders of other religious groups, particularly with the Roman Catholics, and were able to assuage the fears of their colleagues. The Buddhist community saw this dialogue as an opportunity to help increase understanding and sympathy toward Buddhism, a process which could be helpful to the Buddhist community.

There was also the tradition of Buddhism in the course of its long history to work with other religious groups. Since the essence of Buddhism is to abandon all forms of attachments, its hallmark has been not to criticize or condemn any other religion. The Buddha himself often visited other religious centers and leaders, and followers of Buddhism have often been encouraged to study and experience different systems of religion or philosophy.

Among Catholics, Nostra Aetate initiated a fundamental change in the way the Church viewed other religions. For the first time it encouraged dialogue with them. A profound rethinking and appreciation of the intrinsic validity of other religions has gone on; Catholics have become eager to explore and learn about other religions. Dialogue for both groups became timely and appropriate.

The dialogue is sponsored by the Buddhist Sangha council and the Catholic Office of Ecumenical and Interreligious Affairs. It was formed as an official, on-going, core group dialogue. The core group was designed to accommodate approximately eight Buddhist representatives and eight Roman Catholic representatives. Meetings were to be held every six to eight weeks, rotating between Buddhist and Catholic locations.

The committee from the beginning recognized that this was a very early and preliminary dialogue, with a great need for mutual patience and simple getting to know one another. We have become aware first hand that we have gifts to give each other and we have gifts to receive from each other. Herein lie some of the first fruits of our dialogue.

The Essence of the Journey

There are vast differences in our histories and spiritual lives. Yet, we all entered the dialogue with a spirit of openness and the expectation that we could understand each other; we were not disappointed. Our dialogue experience unfolded into four dynamic processes.

First, we discovered that learning about each other's tradition was learning the vocabulary that it uses to express itself. This proved to be more difficult that we expected, because the vocabulary comes from such different worlds. Many words have no reference in the other tradition. For example, Buddhists were perplexed with the Christian notions of soul and creator God, while at the same time, Catholics had great difficulty with the concepts of anatman (no-soul) and a cosmos without a God. At times we spent an entire session on just one word or concept. We learned not to attempt to cover a lot of material in a single meeting, for we found it took time to get in-depth understanding.

Second, while each dialogue session has brought us some knowledge and understanding of the other's tradition, at the same time we discovered that we were re-encountering our own. The novel questions and fresh approaches required us to look anew at our own traditions, to see inconsistencies, to discover what we needed to think through, it challenged us to articulate to one another what we took for granted among ourselves. Sometimes this gave us a whole new perspective on our own beliefs. We expected to be teacher of each other, bet became students or our own traditions.

Third, there were discoveries. Catholics unexpectedly learned about the negative attitude towards Christianity among Asian Buddhists, the legacy of Christianity's involvement with western colonialism, which began in the sixteenth century and continued in parts of Asia for more than four hundred years.

This legacy made all the more powerful the Buddhist's discovery of the extraordinary practice of compassion exemplified in the life of Jesus in all its simplicity and beauty. At the same time Catholics discovered how important compassion is in Buddhism, as comparable in its transcendence to divine basis of love in Christianity. We discovered in the lives of simplicity and compassion shared by the founders of our religions something basic to both. it is noteworthy that in spite of the differences, we share something so fundamental in our orientations. This brought up the mystery of how our traditions could share something so important, yet come from such radically different origins.

Among the topics we discussed were concepts of love: the Buddhist four Brahma Viharas (sublime states of living) of Metta (loving-kindness) , Karuna (compassion), Mudita (sympathetic joy) and Upeksa (equanimity) were compared to the Christian concepts of Eros, Philia and Agape. We also discussed concepts of Soul and No-Soul (anatman), of resurrection and rebirth, and of Gnosis, saving knowledge.

Looking for common points of reference has turned out to be more difficult that one could imagine. But, in view of the compassion central to each tradition, a concern for the welfare of all beings stands out.

Each tradition seeks to draw people towards a greater, purer more loving reality than that found in the ordinary human context of life, so that they may realize their full potential.