Seven Dimensions of the Mind

A Mystical Map of Existence & Consciousness

Satguru sivaya subramuniyaswami’s framework of seven dimensions of the mind divides consciousness into seven categories that range from gross to extremely subtle. The first two describe physical existence—the inside and outside of things. The third dimension is mankind’s normal level of consciousness, consisting of thoughts and emotions about our own and others’ lives. The fourth through the seventh dimensions can be described as the inner, mystical or higher realms of consciousness. They are within everyone but require training and practice to be accessed with continuity. This unique framework is useful in providing guidance in our efforts to access inner states of consciousness. This requires knowing which dimension of the mind the inner state is in. Like following a mariner’s map, once we pinpoint a superconscious experience we are able to return to it again and again, just as sailors can reach a shore on a chart. Gurudeva gives a helpful key to experiencing the states of consciousness in the fourth through seventh dimensions by relating them to the chakras. Specifically, he states that, while in meditation, to experience states of inner consciousness within the fourth dimension, look at the world from the chest area (anahata chakra); for the fifth dimension, look out from the throat area (vishuddha chakra); for the sixth dimension, look out from between the eyes (ajna chakra); for the seventh dimension, look at the inner world through the top of the head (sahasrara chakra).
Satguru Bodhinatha Veylanswami

Author’s Introduction to the Dimensions

The dimensions are a positive and helpful way of looking at life and understanding the experiences we have on the inward path. By identifying experience as being within one dimension or another, we are able to know at all times just where we are in consciousness, and that knowledge is the control over awareness that we need to continue the upward climb. At all times we are flowing through all of the dimensions. They all exist in total completion right now within us. However, we are only conscious periodically in one or another of them as awareness magnifies itself and registers the dimension by focusing upon it, shall we say.

Prelude: Awareness and the Seven Dimensions

Awareness itself functions differently from one dimension to another. When we look at life from the fourth dimension, we see more in depth than we can from the third or the second. Remember when we studied the second dimension, we found no depth at all? Then we created the third. We put depth and life, vigor and vitality to the second dimension of things that was just sitting there. Next we became tangled in this vigor and vitality, in the relationships between people and people and people and things, and the subconscious was created. The sense of ego, of personality, evolved out of the third dimension, for it is composed strictly of odic, magnetic force. The intellect and emotions dominated us.

When we released awareness to travel freely in the mind by managing positively the second and third dimensions, we entered another perspective. We gained the overview, a mountaintop consciousness from which we could see a nine-day scope of time and look into and through all of the intricacies of the third dimension and how it is created. In a sense, we put more light into the third dimension, the dark area of the mind. [Here, the term awareness refers to: Individual consciousness; perception; knowing; the witness of perception, “the inner eye of the soul.”]

When we are in inner darkness and confusion, that is the third dimension totally. But as we brought more light into the third dimension and saw how it was constructed, we were in the fourth dimension and could also look into the deeper dimensions. From the fifth dimension, we became aware of the intricacies and the inner workings of the fourth dimension, seeing what psychic nerves look like, seeing how psychic nerve currents draw their energy from the central source of energy. In the fifth dimension, we became aware of a bright light that filled the cranium. In a flash we intuited vast knowledge and saw the creation, preservation and destruction of objects over seemingly great spans of time simultaneously in the now. A deep love, a universal and all-embracing love, unfolded. Compassion burst forth as we came to understand the predicament of our fellow man.

Awareness, too, changed. Instead of traveling or flowing through the mind, now it could focus and look into any area without seeming to move. Experiences came before our inner vision, and we could even bring past and future into the now. Later we evolved into the sixth dimension, where all form is reduced to sound and color. The devonic or heavenly realm of forces as represented by Gods, Deities and devas became manifest. From the sixth dimension, which corresponds to the ajna chakra or third eye, inner worlds opened and light flooded through the entire body.

The seventh dimension, or sahasrara chakra, brought us into pure consciousness or pure space void of form—awareness aware only of itself. Here awareness finally withdraws even from the magnificent visions of superconsciousness, and with no objects is able to contemplate itself as kaif». Finally, the snake swallows its own tail, awareness dissolves and only That remains, the Self God beyond all dimensions of the mind.

Of course, it is one thing to hear about the dimensions, to be intellectually fascinated by the vastness of this perspective, and quite another to make them an experiential part of our lives. That is what must be done next. Identify the dimensions within the context of your own personal experience. Ask yourself, “Which dimension does this kind of happening belong to? How does one dimension relate to and exist within another inside of me?” Mark off the various areas of the mind. Map them out carefully and you will identify and enjoy aspects of yourself you never knew existed before.

You will observe that man is a whole, the totality of all existence residing within him in various layers of subtle and gross vibration, evolving ever more subtle as the continuum penetrates deeper into his being, reaching ultimately the timeless, spaceless Reality of himself which he then identifies as the one Reality in all of existence.

The Seven Dimensions in a Nutshell 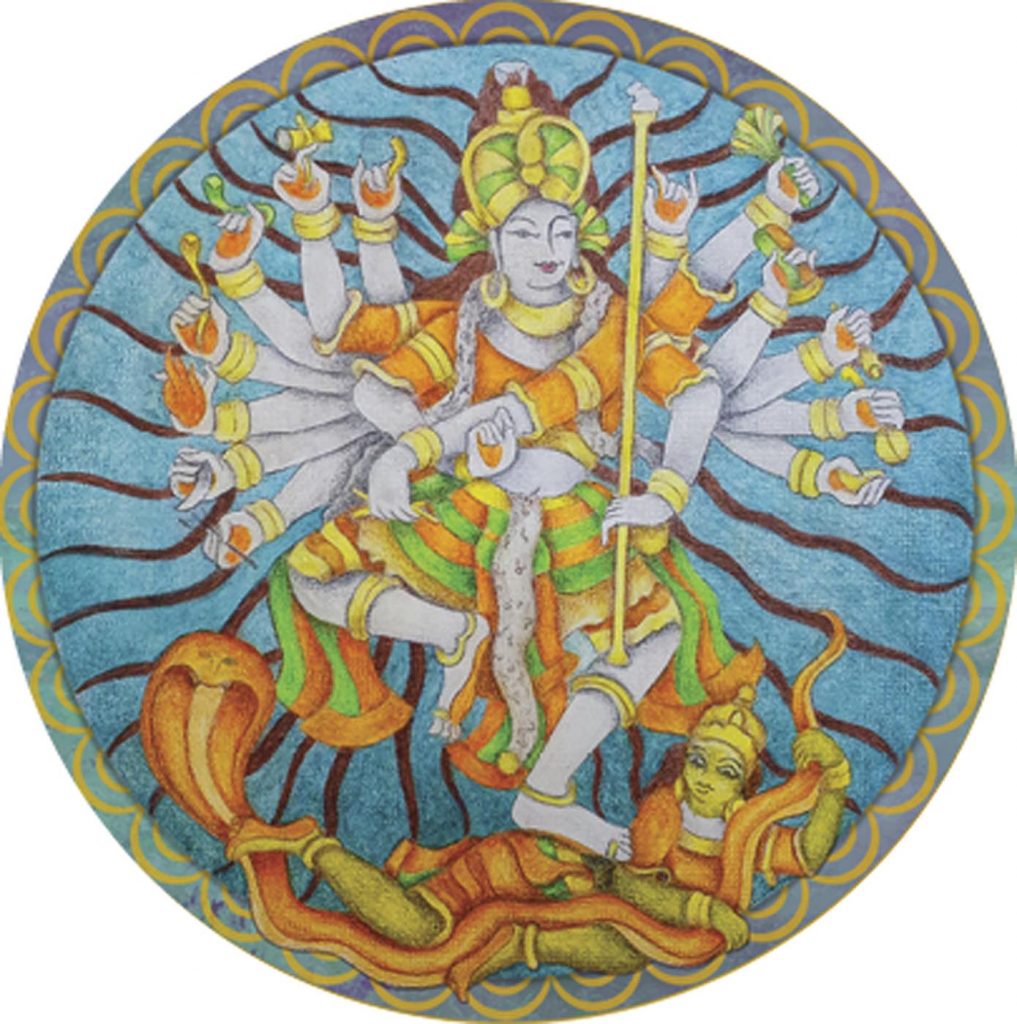 A traditional kumbha pot with mango leaves and a coconut to depict the placid auspiciousness of this dimension of the mind.

The inside of physical objects that you cannot see or touch.

All physical objects that you can see and touch.

The interrelated magnetic forces that exist between people and people and their things.

Awareness cognizing the interrelated forces of the fifth, fourth and third dimensions. A natural state for those who meditate.

Awareness of forms in their
totality in progressive states of manifestation.

The rarefied area of mind where forms are conceived of inner sound and colors.

First Dimension: The Inside of Objects 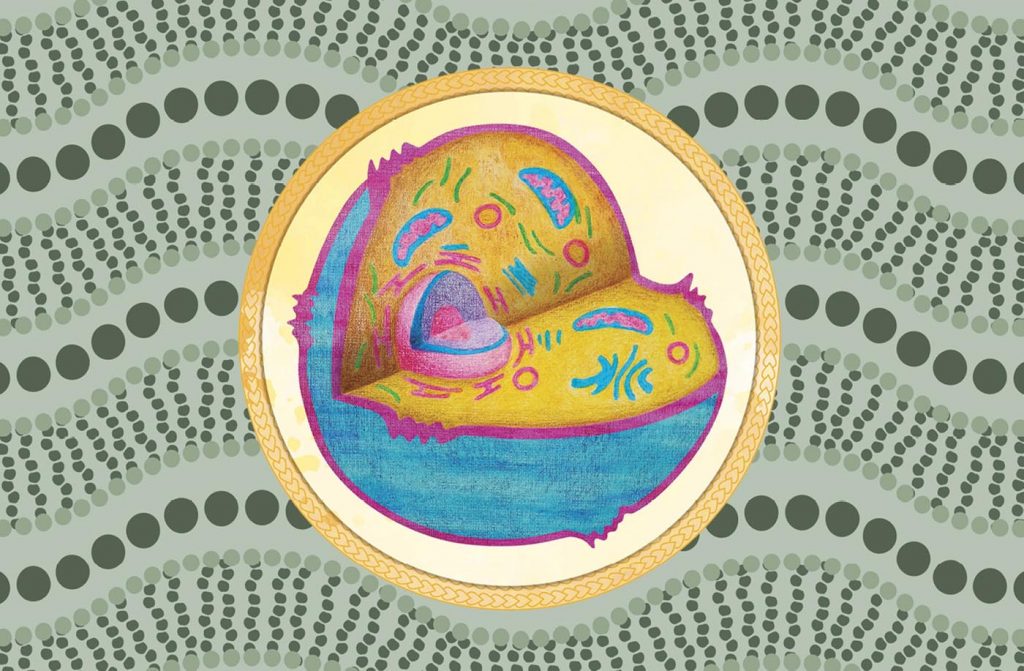 Inside a human cell: While the surface of a cell is simple (the second dimension), the inside is complex almost beyond imagination. Here the artist cuts into a cell to reveal a few of the tens of thousands of inclusions. All of the main images use Australian-aborigine dotted-art backgrounds. BAANI SEKHON

It is interesting to note that most of modern science is dedicated to unfolding knowledge of the first dimension, and that within the molecular, atomic and sub-atomic elements of matter the other seven dimensions are discovered. Thus the scientist, by looking into matter, finds the deeper dimensions to the point of reducing matter to energy and energy to sound and light. Further reducing sound and light to consciousness and anti-matter, he verges on the brink of contemplative realization similar to that discovered in deep meditation. Therefore, all dimensions of the mind exist in every cell, every atom in the universe.

Within the first dimension of the mind, called arehmushum, there are energy flows. Energy in its static state. Energy spinning. Energy lifting, pushing, pulling, rising, falling, attracting, repelling, changing form, filling, emptying, appearing and disappearing. Eighteen forms of energy exist in the first dimension, interacting and causing the phenomena observed in the physical world and studied by science as gravity, momentum, inertia, magnetism, electricity and various forces. We can see these energy flows very readily in nature as we witness, without holding previous concepts, the actions and interactions within plants, within stones, within water, wind and fire.

(Continue other dimensions in the next time)