On a recent backpacking trip to South Vietnam, Raul Dias chanced upon Caodaism, a 20th Century monotheistic religion thats a curious amalgamation of various philosophies, and its venerated ‘Ground Zero’

The sense of being stalked was a tad too overwhelming for me to ignore! It was as though that omnipresent, piercing gaze was almost beginning to sear a mark on the back of my head. At every turn, along every gilded corridor, atop every ornate be-dragoned pillar, ‘The Eye’ made its presence felt. lBut had I known then, what I do now, my aforementioned ‘stalker’ wouldn’t have seemed so sinister after all…

The Divine Eye with 16 Eye Rays 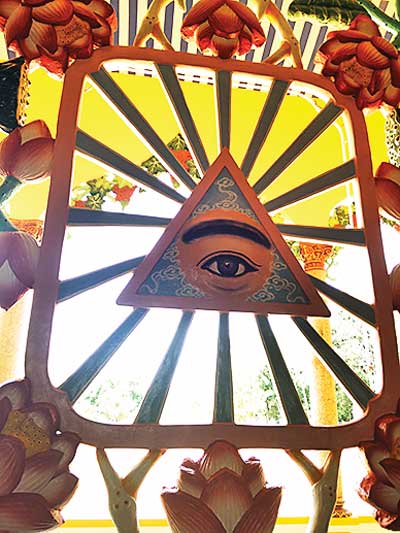 A little back story first. Tired of the incessant traffic and urban chaos that typifies a Vietnamese metropolis like Ho Chi Minh City (HCMC), I needed to get a dose of calm and quite—or so my jangled nerves were warning me! So, taking a short detour from original South Vietnam itinerary, I paid heed to the suggestions of a fellow backpacker (who insisted I simply had to go there) and boarded a public bus from HCMC’s Mien Tay station, heading 96km northwest towards Tay Ninh.

Besides being a stopping point for those desirous of visiting the famed Cu Chi Tunnels, this bucolic province is also home to one of the world’s best kept secrets—Caodaism. Founded here in southern Vietnam in 1926, this unique and colourful religion—with the word “cao” meaning “high” and “dai” meaning “peace”—fuses secular and religious philosophies of the East and the West and is based on certain codes believed to be revealed to the religion’s founder Ngo Van Chieu, a district head of the French administration in Vietnam, via a series of séance messages starting from 1921. With over 3.2 million practicing Caodaists, it is Vietnam’s third largest religion after Buddhism and Roman Catholicism. What’s truly novel about Caodaism is that it combines elements from many of the world’s main religions, including Buddhism, Confucianism, Christianity, Hinduism, Islam, Judaism, Taoism, as well as Jainism. It is syncretistic in its doctrine, ritual practice, organisational structure, divinities and philosophy.

And the Caodai Holy See complex, 4km east of Tay Ninh’s main centre is at the very vortex of it all. With a blazing June sun at its zenith, I found myself staring at a rather kitschy and colourful edifice with a unique hybrid-style architecture that bore elements of everything from a Portuguese-style church to a traditional Indian temple with a few Chinese dragons added to the fray. 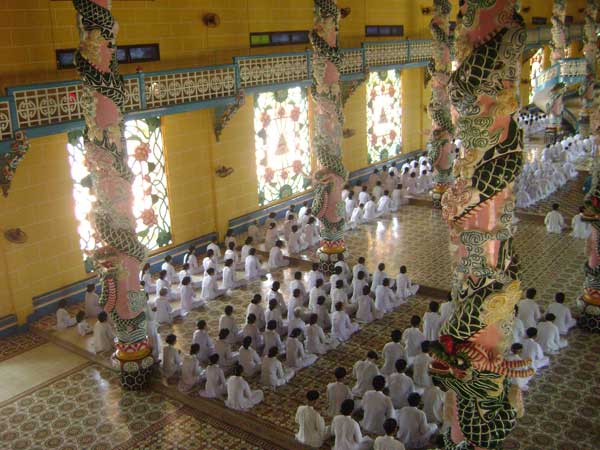 Taking my shoes off, I made my way inside the cool tile-clad main hall of the ornate cathedral with its nine levels that represent the nine steps to heaven. And it was then and there that my tryst with the “stalking eye” began. On hand to explain bewildered visitors, the intricacies of the religion and its customs was Tranh-La, the cathedral’s official guide and de facto guest relations officer. Sensing my apparent confusion, Tranh-La was quick to point out that The Divine Eye serves to remind Caodai believers that God witnesses everything, everywhere, constantly. As it was soon becoming apparent to me, at the Holy See, there are in total 50 Divine Eyes of five different shapes; each carrying a different meaning related to various spiritual aspects. The one on the sky blue, star-spangled globe shows the Supreme Being above the North Star in the Ursa Minor constellation. The one on the facade of the Holy See has 35 rays of light which represent the three major religions and five main religious doctrines of the world. On the latticed windows of the outer walls, the Divine Eye has 16 rays of light emanating from it. Nine radiate upward representing the nine levels of heaven, and seven radiating downward representing the seven emotions, which believers must control.

I was also gobsmacked when Tranh-La asked me for a US$1 dollar bill, on which he pointed out the very same Eye of Providence atop a pyramid which according to urban myth is a symbol usually associated with Freemasonry. This was another fascinating aspect of Caodaism, in that among its pantheon of saints, historical personalities like Joan of Arc, Louis Pasteur, Shakespeare and Lenin find a strong foothold. But the most prominent and revered of these is Victor Hugo since he gave many teachings and also the text of a number of important prayers to Caodaism. In fact, he even predicted that he would become the prophet of a new religion to merge European and Asian mysticism.

As it was about time for the noon session of the four daily prayer ceremonies to begin, I thanked Tranh-La for his time and patience and started to make my way back to the main entrance. But as the ceremony was almost ready to begin, I was told that I could not cross over from left to right and that I would have to perform a circumambulation of the cathedral from the outside in order to exit. The reason: I would come in the way of the holy spirits who make their way from left to right during the ceremony.

So, not wanting to being spiritually trampled upon, I did as I was instructed and made my way back to another high-spirited place just outside the complex’s gates where a cold beer had my name on it!