There is an amnesia in the minds of people about 1,000 years of Muslim, Chinese and Indian civilizations during the period 700-1700 CE. Our educational system largely neglects that, instead of concentrating upon Europe where much of the period is glossed over as containing the Dark Ages and/or Medieval Ages, school syllabi, particularly those of STEM subjects (Science, Technology, Engineering and Maths) and the subject of sports, tend to jump over the period, leaping back from the European Renaissance to the Roman and Greek civilizations, largely ignoring scientists or inventions from non-European cultures. 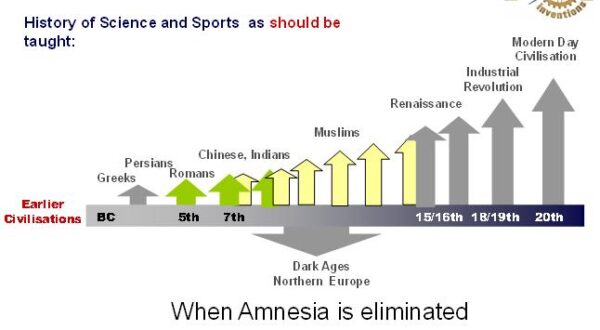 Fig. 1: Diagrams of amnesia persistence and amnesia removing. A possible danger of this amnesia is that it engenders a superiority complex in the European character whilst, simultaneously, causes an inferiority complex in the character of others. The following diagram clarify the problem and how it may be resolved. It shows the 1001 years gap (amnesia) and appropriately fills the gap with Chinese, Persian, Indian and Muslim civilizations.

For effective social cohesion and inter-cultural respect, it is essential to go further and enrich all other taught subjects, including sports, with contributions from other cultures, especially those from Muslim Heritage and in particular from Muslim Spain; without which the European Renaissance would not have taken place.

The subject of Sports in Muslim Heritage deserves special attention. Not even Muslims are aware of the vast contributions the classical Muslim world had made to sports development. For example, we all associate Cricket with “Britishness”, yet this game originated in North India around 700 CE and travelled westwards reaching its climax when the British adopted it as theirs. Another game is Polo, an ancient sport from Persia and Afghanistan. The Muslims enjoyed it greatly. Manuscripts show miniatures of men and women jointly playing in the same field.

It is believed that Prophet Muhammad loved sports. Traditions of the Prophet record that he raced with his wife Aisha. She won the first sprint, but lost on the second round. He encouraged parents to teach children swimming, riding and archery.

The Arabic word for sport is Riyadhah. It is interesting to note that the same word is used for mathematics and the Sufis used it to refer to exercising the soul. Sport in Muslim Heritage has been associated with exercising the body, the mind and the soul. Sporty behavior was normally linked with high morals and exemplary behavior such as chivalry, trustworthiness and generosity. When Muslims reached Spain, Sicily, Istanbul (Constantinople) and other parts of the world, they stopped all sports which inflicted harm on the players, like gladiators and the like. One wonders if those Muslims would have allowed knock-out in boxing.

We have recently noticed a surge of sportsmen and women from the Muslim world participating in the Olympics. Of interest is the high percentage of women players. But of particular interest is the appearance of Muslim women with Hijab competing with “Sharia-compliant” dress code, i.e only face and hand of women are to be shown. When, in 2008, Bahraini lady Ruqaya al-Ghasara won her gold in 100 and 200m run, she shook the world with her dress covering all her body.

An important legacy of Islam in China is represented by Muslim Kung Fu, developed throughout history by Muslim Masters, who merged in their endeavour and training between physical and spiritual perfection. The following short survey by Mohammed Khamouch and the longer article referred to below by the same author analyse this legacy and shed light on its different historical and cultural dimensions.

In this article we will be looking at several handbooks on archery written in both the Islamic world and in the West with the aim of determining which is the oldest useful manual on archery. Our investigation is guided with criteria in function of which materials were selected, such as availability of the text, the existence of an English version (original or in translation) and its comprehensiveness in covering archery techniques. On the basis of these criteria, it turned out that the oldest useful manual on archery is a book written around 1368 by Taybugha Al-Ashrafi Al-Baklamishi Al-Yunani, The Complete Manual of Archery for Cadets, known in the scholarship as Saracen Archery.