Cardinal Jorge Bergoglio of Argentina, archbishop of Buenos Aires, has made history as the first pope of the Roman Catholic Church from Latin America, from the Jesuit order, and the first to adopt the name of Francis, inspired by St Francis of Assisi. His election has invoked diverse reactions from ecumenical leaders in the Latin America region.

The moderator of the World Council of Churches (WCC) Central Committee, Rev. Dr Walter Altmann, a Lutheran pastor from Brazil, identified the election of Pope Francis I as a “transition in Christianity”.

"In recent decades, there has been a radical shift to the South in world Christianity. The election of an Argentinean pope reflects this new reality, despite that most cardinals come from the North," said Altmann.

"My expectation is that his mandate can be marked by intense and deep ecumenical dialogue and cooperation," he added.

In Buenos Aires, Pope Francis I led one of the largest dioceses in the 1990s, which demonstrated concern towards social justice issues.

Rev. Romi Márcia Bencke, general secretary of the National Council of Christian Churches of Brazil (CONIC), pointed to the significance of Latin America's Christian history, and its connections with the new pope.

"The path of the Catholics in our continent was marked by the rich experience of liberation theology. Particularly in Brazil we experience a rich ecumenical coexistence with the Roman Catholic Church, which is one of the co-founders of CONIC. Hopefully the new pope will continue to strengthen our ecumenical journey," said Bencke.

"The choice of Bergoglio confirms the direction that the Roman Catholic Church had already taken in the times of Benedict XVI," commented Bishop Frank de Nully Brown of the Evangelical Methodist Church of Argentina.

For pastor Nestor Paulo Friedrich, president of the Evangelical Church of the Lutheran Confession in Brazil (IECLB), "this election could mean surprise, change and opportunity." Reiterating the ecumenical commitment of his church, Friedrich expressed hope that the new pope will value dialogue.

The Lutheran leader said he prayed that the election of Pope Francis I would "contribute to the development of the Roman Catholic community and the world, working and encouraging renewed ecumenical partnerships, and strengthening dialogue towards common witness to the vibrant gospel of Jesus Christ." 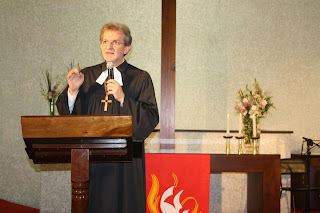 The reactions of Argentineans about the election are rather divided. On one hand, Bergoglio is accused of not speaking out against human rights violations at the time of the military dictatorship, while many proclaim that the bishop helped hundreds of people to escape prison and death during that same period.

Pope Francis I indicated the directions he will be taking during his papacy in a speech addressing the crowd in St Peter's Square on 13 March.

“And now let us begin this journey, the bishop and people, this journey of the Church of Rome which presides in charity over all the churches, a journey of brotherhood in love, of mutual trust. Let us always pray for one another. Let us pray for the whole world that there might be a great sense of brotherhood,” said the new pope.